This is Hwayugi Korean Drama Episode 4 Review, Jin Sun-Mi saves the zombie girl before she is burned, she gets a new name Jin Bu Jia. Jin Sun-Mi finds out the gate of hell is going to be opened in the human world, she is scared about it. 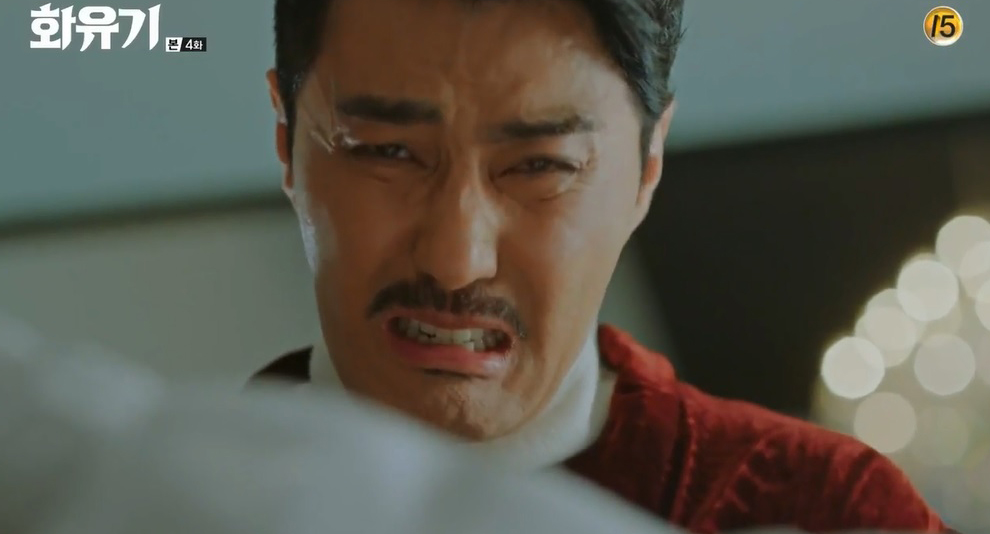 Oh Gong tells Sun Mi that he won’t save Han Joo if she doesn’t take off Geum Ganggo for him, but Ma Wang doesn’t think so and reveals he will be in tears when Sun Mi is sad. Oh Gong saved Han Joo on the end before the zombie girl approached him. He complains that he is the great sage but has to do the clean job not for her, and reveals he will kill her if Geum Ganggo doesn’t protect her. Sun Mi is sad after hearing what he said.

Oh Gong transfers into Ji Young and tries to steal the contract which Ma Wang signed with Sun Mi, but Ma Wang saw through it. They have a fight, but Soobori stops them and add the clause that points out that Oh Gong will get his freedom that when Sam Jang dies. Oh Gong tells Soobori he will agree it if Ma Wang gives his building to him, but Ma Wang rejects it.

Ji Yong is going to look for another building for his boss and persuades him to accept Oh Gong’s offer, but Ma Wang doesn’t agree and wants to torment him. Then he falls down and gets nosebleed, P.K’s fans take his pictures and think he picked his nose. Ma Wang is frightened and lets Ji Yong delete the pictures for him.

Ma Wang is scared by zombie girl after finding out she stays in his fridge, P.K tells him Oh Gong froze her because she is too rotten and lets him not mind it. But Ma Wang doesn’t agree and knows that she got life because of Sam Jang’s blood. He wants to carry her out when she wants to go back his fridge.

Ma Wang takes the zombie girl into her company and lets Ji Yong takes care it for him. Han Joo thinks his boss is going to have a big event with P.k when P.k park stands under the building with a pack, Sun Mi doesn’t deny it. But P.k lets her burn the zombie girl after entering his car. Sun Mi wants to keep the zombie after knowing she doesn’t know who she is.

They visit General Frost and ask him to freeze her and make her not rot, and asks Fairy Ha to do makeup for her. But the zombie’s eye falls out after Fairy Ha completes it. Sun Mi asks Oh Jeong about the towel which the zombie took, he tells her the towel comes from kingdom hotel and thinks she might a rich girl. She is very happy about and runs into the two guys who buried her.

They visit the gym in the kingdom hotel, but the instructor reveals it’s first time she sees the zombie. A man finds out the zombie hurts his foot while training, then he thinks she was dead when she lies on the couch and isn’t breathing. Sun Mi wakes the zombie up and takes her away.

Oh Jeong visits Oh Gong and do housekeeping for him since the building belongs to him, Oh Gong is upset when he knows Sam Jang added everybody to the chat group except him. Sun Mi knows there people died in the gym and wants to visits a again, but she doesn’t want to go alone.

Han Joo tells Sun Li that his wife doesn’t gain weight after eating many foods. Ji Yong has a meet with his wife and knows that she got a diet tattoo on her arm. Sun Li thinks she should find a way to remove the tattoo, but Ma Wang thinks they should find the spreader first, and lets Sam Jang act a person who wants to get in shape.

Oh Gong goes out with a blanket, thinking zombie turned on the air conditioner, and lets her returns the fridge. The zombie thinks he shouldn’t call her zombie as she got a name Jin Bu Ja, and reveals he doesn’t have to join the chat group as he got a special 1:1 Bond.

Oh Gong goes to find Sun Mi in the night club, but she refuses to get rid of the tattoo and wants to eat more. He doesn’t follow what she said. They visit the gym and think the instructor is the evil spirit when she is going to tattoo her client, but they find out she isn’t.

Oh Gong thinks the evil spirit comes from human’s body when she is weak. Sun Mi catches the spirit when the woman is weighting herself, Oh Gong kills the evil spirit then. Ma Wang thinks Bu Ja begins to stink and asks her what the matter? She reveals Oh Gong keeps turning on the boiler and thinks it’s the case.

Bu Jia is in tear when Oh Gong is going to melt her. Sun Mi sees the misfortune jar breaks and doom of human world, she is scared. Bu Jia thinks she knows Kang Dae Sung when he is hitting the new year bell in the TV. Sun Mi asks Oh Gong whether or not he will stay with her no matter what happens to her, he accepts it.